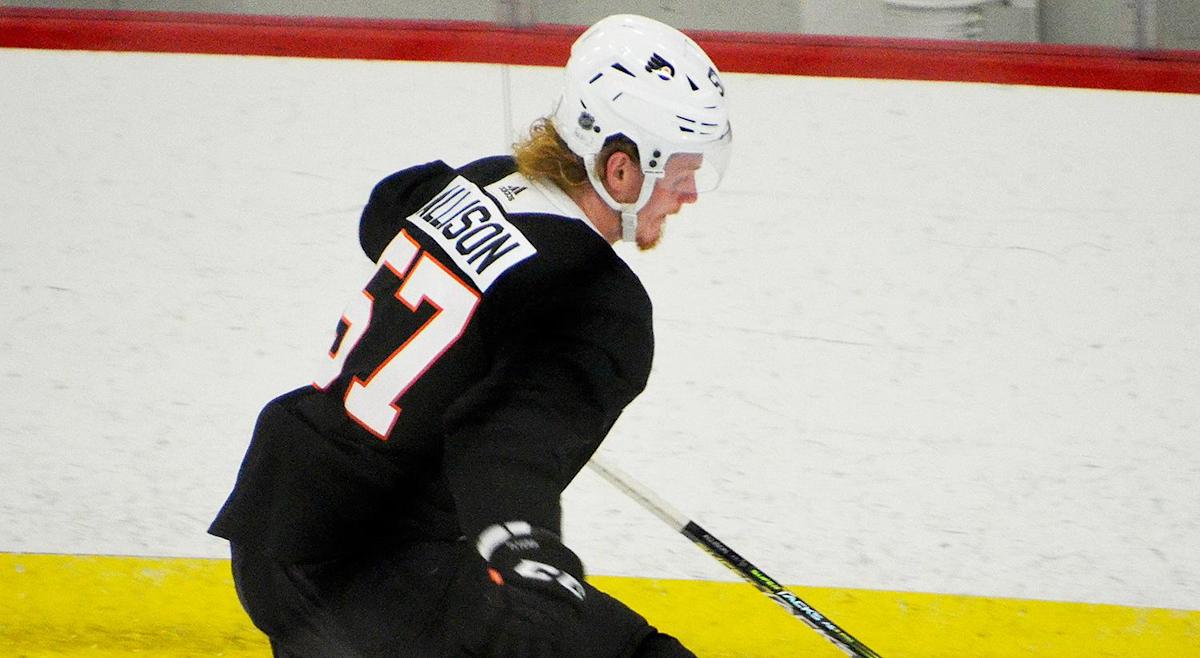 VOORHEES, N.J. — Wade Allison was forced to exit the Flyers‘ rookie game Sunday after getting tangled up in an awkward play along the boards with Rangers prospect Braden Schneider.

During the second period at Virtua Center Flyers Skate Zone, Allison went down in pain with what looked like an injury to one of his legs. He appeared to suffer the injury when he landed down on his right skate. Allison had to crawl and slide himself to the bench before play was stopped. He was then helped across and off the ice to the locker room.

There was no immediate word on Allison’s status. As expected, with a rookie game at play and his long-term health of the utmost importance, Allison did not return for the third period. The Flyers lost to the Rangers, 3-2.

AHL affiliate Lehigh Valley head coach Ian Laperriere did not have an update on Allison in his postgame press conference.

“I’m sure he’s going to take it hard. No matter what, if it’s a week or two weeks or a month or two months, you put all that work in in the summer, he came in, he looked great all week, he looked great [Saturday],” Laperriere said. “He played the way he should be playing in a rookie game. He only knows one way to play. I really feel bad for him. Unfortunately it’s part of the game, injuries are part of the game, especially when you play that style of hockey. I don’t know what the injury is and hopefully it’s going to be a quick one.”

Allison, a winger who turns 24 years old next month, is one of the Flyers’ top prospects and vying for a job in the team’s season-opening lineup. The big club opens training camp this upcoming Thursday.

The 2016 second-round pick is a north-south, energetic type of power forward who plays to the whistle. True to his game, he was finishing his checks Sunday and defending teammates in any extracurriculars after the whistle. Allison impressed in his 14-game audition with the Flyers at the end of last season.

“He played NHL games last year. He could have taken it easy, just float out there but he didn’t,” Laperriere said. “He played his style, he played physical. It’s probably why he got hurt but I really do feel for a kid like that.”

Allison played collegiately at Western Michigan. As a sophomore for the Broncos, Allison was rolling with 15 goals and 15 assists in 22 games before tearing his ACL. That injury and others were an obvious factor in keeping him at Western Michigan for all four years instead of the prospect signing his entry-level contract earlier.

The well-groomed Allison signed in March 2020 and made his NHL debut in April 2021.

“He’s a good buddy of mine,” Tanner Laczynski, who was also drafted in 2016 and signed in March 2020, said. “To see him hobble off the ice, to know all of his previous injuries and stuff, I know what he’s feeling, I know it sucks. Taking him off the ice, just trying to keep it positive, letting him know this isn’t the end obviously. He’s a great player, he’s going to come back from it, he always has. He’s a big-time guy and he’s positive about it, so it’s good to see.”

Jan 10, 2019 Edmonton Oilers captain Connor McDavid has worked his butt off to be the best hockey player in the world. He has consulted…

Jun 5, 2019 ST. LOUIS — Perhaps you saw Barclay when he made his home debut in December. Then just three months old, the yellow…