On Thursday night, LeBron James and Giannis Antetokounmpo will draft the 2020 NBA All-Star Game rosters from the pool of players voted as starters and reserves in each conference.

This year’s game is missing a few huge pieces, as superstars including Kevin Durant, Stephen Curry, Kyrie Irving and Klay Thompson are all out, while a few looming stars in Zion Williamson and Ja Morant didn’t make it either. Still, the field is chock full of amazing talent, and there’s no shortage of storylines leading into the Feb. 16 game.

We decided to build a mock draft that ensures the best possible game — one that is somewhat based in reality, and somewhat just based on our own basketball desires. Here we go.

The first pick is vital. If James chooses his explosive new teammate right off the bat, it signals his faith in his partner in crime and helps Team LeBron win. The Brow is the perfect All-Star game player. He was born to catch lobs and make highlight dunks. It’s no accident that he owns the record for most points in an All-Star Game with 52.

This pick also helps the overall game for one big reason: It makes Team LeBron feel more like the Lakers and less like an All-Star squad. That immediately injects some real competition into both the draft process and the eventual game, especially if Giannis stocks his squad with other Western Conference superstars.

One of the cool things about the two-captain format is that it introduces matchups we wouldn’t normally see in a typical East-West showdown. This season Leonard and James are battling for the heart of Los Angeles and the Western Conference title. If Giannis selects Leonard with his first pick, that rivalry will spill into the All-Star game, too. Fan-tastic.

Giannis should immediately grab Harden. While James and Leonard are battling for the soul of Los Angeles, Harden and Doncic are fighting for the Texas trophy. Harden has never won an All-Star MVP, which seems weird at this point, and pitting The Beard against LeBron and Doncic could fire him up to go get 50.

Should Trae Young be starting? Who cares?

Should he be shooting? Yes! All-Star Sunday was made for freakish talents to flex their unique offensive skills. With Curry on the shelf, Young is emerging as the most exciting young shooter in the game. This 21-year-old has a chance to light up Chicago with a flurry of deep 3s. If he doesn’t try at least one 40-footer, it’s going to be a disappointment.

Also, for all the arguing about who is better, it would be awesome to see Luka and Trae on the same squad for once.

Last year’s All-Star Game was 48 minutes long. The two teams combined to shoot 167 3-point shots. That’s 3.5 per minute of play, and that is absolutely bananas. Any team serious about winning this game must have tons of shooting talent, and that’s why Giannis needs to take Kemba over the other two remaining starters. Walker is having a terrific season shooting from deep, sinking nearly 40% of almost 9 3-point tries per game.

Siakam is on top of the world. He’s a defending champ, the reigning most improved player, a member of the hottest team in the NBA and a first-time All-Star. He’s also a key member of the last team to knock Giannis out of the playoffs. LeBron should grab him just to trigger bad memories.

All-Star Sunday has become No Country for Big Men. No big man has won the game’s MVP since Shaquille O’Neal. Lumbering dudes like Embiid might thrive within the context of normal NBA action, but their incredible skills don’t really translate to these environments.

Giannis needs to use the reserves pool to build a roster full of hungry stars who want to torch LeBron and his teammates. Last year, Giannis used his first reserves pick on his teammate, Khris Middleton (boring!), but this year he should take Butler.

Yes, Butler essentially sat out last year’s game, but there’s reason to believe he’s motivated this year. Many of us think he should be a starter, and folks, great things happen when Jimmy Butler gets angry. You don’t think he wants to make it clear that Trae Young shouldn’t have made it in over him?

LeBron is a loyal guy, and he should use his first pick of the reserve round on Simmons, a fellow Klutch client. Plus, it gives us a taste (or preview …?) of Simmons vs. Embiid. Picture this: A 1-on-1 fast break with Simmons racing to the rack and Embiid as the last man back protecting the hoop. Now that’s what I call a Philly Special.

Lillard is the hottest player in the solar system right now, averaging 44.9 points in his past seven outings. Giannis has to take him. Like Butler, he has the right personality for this year’s game. He would probably love to torch Team LeBron and take home an All-Star MVP trophy.

It’s hard to imagine LeBron not picking his boatmate early in the reserve round — and anything that pits Paul against his former teammate Harden on this giant stage makes for a more entertaining game.

Ingram is a candidate for most improved this season, and he deserves a huge dose of some national attention. He’s also a guy who has the potential to go off in an All-Star setting. But best of all, he would probably love nothing more than to do it against James and Davis, who are the main reasons he’s wearing a Pelicans uniform. This is a no-brainer for Team Giannis. 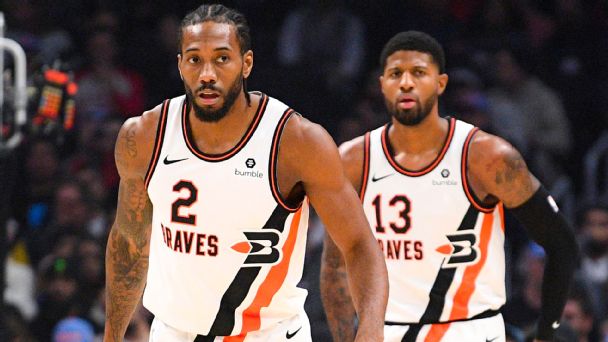 The NBA is live! Tune in here.

Three things about Westbrook: He’s playing his best ball in years, he has won two All-Star MVPs and he wants nothing more than to beat Lillard after this whole ordeal. He’s a bargain this deep in the draft.

Middleton is having the best season of his career, and there’s no way LeBron can steal him away from Giannis. Middleton is a 50/40/90 guy whose jumper could do major damage in a wide-open contest.

Of all the talented young players in this year’s game, Mitchell might be the one most likely to have a breakout performance. He can do it all on offense and this game gives him a platform to prove it to the world.

Lowry and the Raptors are the defending champs. They’ve won 11 games in a row. Yet, Lowry is the point guard understudy to Young, whose Hawks are one of the worst teams in the NBA. Just because the All-Star game is about individual skill doesn’t mean Lowry won’t be motivated to show the world that he is better than the young buck who is starting in front of him.

The main reason LeBron should choose Tatum: So he doesn’t get dunked on again!

Like it or not, the last four picks in this year’s drafts are all bigs. Those guys just don’t flourish in these games. But of the four reserve bigs, Adebayo is fun and the most athletic. He was turned away from Team USA last summer and has been a beast since.

When you picture All-Star Game highlights, you probably picture breathtaking dunks, ridiculous lobs and other high-flying acrobatics. In other words, the stuff Jokic doesn’t do. Still, real hoops fans love Jokic for a simple reason: He’s a hyper-talented big with a very unique skill set that wins game.

Gobert’s expertise is world-class defense. The bad news is this game has no such thing.

Being the last pick might sting a bit, but all the guys at the bottom of this draft should be thrilled. All of them have exceeded career expectations and are important pieces on some of the most intriguing teams in the league. Sabonis’ game isn’t flashy, but it’s effective.